Release 2011r2 was launched in April, the second release of JAVELIN, containing some exciting developments for the serious user.

Find your way with JAVELIN MAP

The concept of the MAP (MRP Action Plan) project was discussed at our last Customer event and 2011r2 marks the beginning of this drive to make better use of MRP information.

All users should appreciate the MRP engine is a powerful tool , churning through supply and demand of everything in the database and making a series of suggestions about what to do to maintain a status quo.  More recently the results have become somewhat easier to interpret with the introduction of the MRP treeview.  The first part of the MAP development takes this concept further. 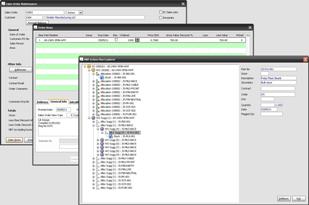 Imagine sitting on a sales order line within sales order maintenance and being able to drill down into how that sales line is planned to be fulfilled.   The new MAP button does just that, not only displaying the works order(s) that will provide the product but allowing you to drill further to see where the materials or components for those works orders are expected to come from.  Of course the data includes suggestions for new orders or modifications to existing, a boon for time pressed Contract managers, and it works for none contract, weak contract and strong contract parts alike as everything is processed by MRP.

Or maybe something has gone wrong on a works order, a broken tool or components scrapped perhaps, and you need to know quickly what effect this will have.  Shift-F6 will bring up the works order hotkey and the new MAP ^ button will allow you to drill up and see what the works orders original qty was supposed to supply.  Alternatively if you are about to start a works order and want to know where the materials are coming from use the other MAP button to drill down.

MAP buttons appear in all key processes and inquiries – Goods Inwards for instance to tell you where to send newly received parts; Stock Inquiry to identify whether stock is really free stock; etc.  But another new development brings Scheduling and MRP closer together.

It has always been possible to build works orders into Assembly Structures, indicating which works order feeds another, but this has always been a one off ‘hit’ when raising a series of orders via MRP or a laborious manual task.  Worse still if MRP moves a works order the links are broken and have to be re-established manually.  However this functionality has now been replaced by focussing scheduling on the MAP data.  Thus the information for assembly hierarchy is automatically updated every time MRP runs without the need for manual intervention.  So if priorities change the next scheduling run will pick up the latest set of MAP data and build its structures accordingly.

Future developments within the MAP project include providing more detail as to why a works order is delayed (capacity restraints at this level or lower down the assembly links) and easier ways to action the effects of material supply interruptions but 2011r2 has already set the standard for clearer direction.

How much is that doggy in the window?

Well maybe not a doggy but certainly steel, nuts and bolts or any other bought out item required – this is certainly a question that many purchasing managers will be asking of their suppliers.  JAVELIN 2011r2 sees the introduction of the long awaited RFQ (Request for Quotation) functionality to aid this quest. 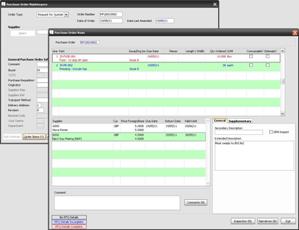 Using this facility inquiries can be raized for one or more part (even none existent parts if triggered from within an estimate) against one or more supplier.  These can be emailed and progressed similar to a conventional PO, and the resulting quotes recorded and collated to allow a particular response to be turned into a ‘real’ purchase order.  If you can get your supplier to co-operate you can even send them a spreadsheet to fill in with his responses and then import directly back into JAVELIN to update the RFQ.

Another kind of map

Well, not so much a map but an eagle eye view of your shop floor, configurable to show your machines in the locations they sit.  The Factory view gives a quick overview of the status of the selected machines – color coded for easy recognition.   Data is streamed live from the SFDC terminals so is as up to date as the last booking. 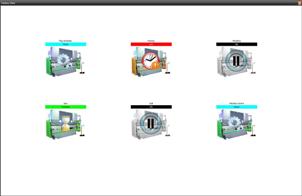 They’re not awkward, they’re a Customer

Ever come across a customer that wants his own style of paperwork, right down to the part description.  No?  I don’t believe you.  But the customer is always right and with Customer Part numbers and more recent innovations in the area of Crystal based documents it’s become more and more feasible to give them what they deserve.

Now 2011r2 adds another option to pave the way to customer utopia by allowing extended part description to be held against the customer part number, so effectively against the customer.  So now if Pierre wants his invoice in French and Luigi prefers Italian then “its-a no problem” either way.

Whilst correct use of Safety Lead time will ensure product is delivered on time when transit times are always the same, sometimes the same product has to be shipped to widely differing locations.  TRADITIONALly the Sales Promized Date caters for this scenario, allowing customers to be advized a later date than the due date, but someone has to remember to set it on the order!   But not anymore.  Now each customer address can have a specific transit time registered against it.  This is added to the due date when a new line is raized on the sales order and automatically stored as the promised date.  One less excuse for a late delivery.

Like all new releases 2011r2 has many more new and improved features than can be described in such a brief summary.  If the above has whet your appetite or you want full details of what JAVELIN now has to offer contact Tom McClure or take a look at some video demonstrations of the new features which can be found within the customer area.