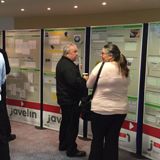 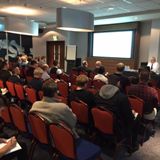 A record turnout of delegates at JAVELIN’s customer event saw a preview of the production control software’s forthcoming 2016 release. It included major enhancements to Advanced Scheduling, along with improvement to its CRM system, Configured Parts and a link to the world’s most powerful sheet metal CAD/CAM software, RADAN.

Whilst JAVELIN, from Vero Software, brings out two new releases a year, customers typically update every two or three years and General Manager, Paul Holmes, said many of them were surprized to see how much additional functionality has been added since their last upgrade.

“We had a number of posters creating a timeline of JAVELIN from 2008 right through to the new 2016 r1 release.  Each poster showed an area of functionality and some customers were seeing 30 posters packed with more efficient and time saving  functionality that they’re not able to use, but could access by upgrading to the latest version.”

The bi-annual event, held at the Ricoh Arena in Coventry, featured a series of eight presentations detailing major steps forward in the two 2015 releases but Paul Holmes says many of the 72 delegates found demonstrations by JAVELIN consultants, of several key functions in JAVELIN 2016 r1, to be their highlight of the day.

“The 2016 release includes an Advanced Planning Board, enhancements to the CRM system and a link to our sister brand, RADAN, Vero’s sheet metal CAD/CAM solution. There was keen interest in how we have developed JAVELIN’s powerful advanced scheduling, including a new interactive tool that visualizes the results of the Advanced Scheduling Engine provided in the previous JAVELIN release (JAS), augmenting the ability to plan manufacturing to the second.”

Delegates were equally impressed by the fact that a large part of the bolt-on Configured Parts module, a chargeable module, is now available free in JAVELIN 2016 r1.

The event also looked at JAVELIN’s future development path, with delegates being invited to contribute their suggestions as to how items such as remote access and mobile applications in particular, should be progressed. “And as JAVELIN is joining Vero’s customer support portal in 2016 we explained how customers can expect to interact with support engineers in the coming months.”

Customer feedback about the day included: “It highlighted JAVELIN’s potential within our business,” “The features demonstrated are more advanced than the ones we’re currently capable of implementing,” “We’re now setting a goal to plan and achieve the potential JAVELIN gives us,” “Excited now to crack on with the upgrade.”