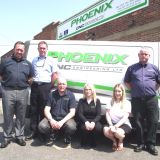 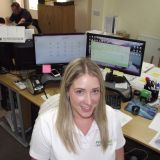 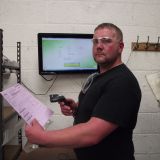 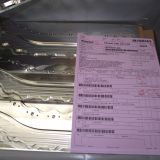 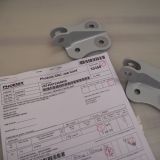 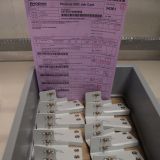 Production Planner Gary Jordan says JAVELIN was installed at the end of 2013 and quickly became the mainstay of their office and shop floor operations.

“We manufacture hundreds of different types of components, and there can be over 1,000 job cards going through the factory at any one time. With several hundred imminent jobs due for delivery in the next two months, JAVELIN is vital for keeping track of where everything is. ”

“As well as running JAVELIN on a number of computers in the office, we also have a full license in the inspection department, and three Shop Floor Data Capture terminals in the production area.”

Ninety per cent of their work is manufacturing aerospace components and order books are growing at a considerable rate. Managing Director Glenn Richardson says they needed a system to control and monitor every process. As JAVELIN has its roots in the aircraft industry, he says it was the perfect robust system for assisting their move away from being a “speed shop” to focusing on long term projects.

“We’re currently starting work for a newly commissioned aircraft that has 15 years worth of orders ahead, and JAVELIN ensures we have the opportunity to be part of that.”

Gary Jordan says complete traceability is non-negotiable to the aerospace industry, which makes JAVELIN’s powerful Materials Control function essential to Phoenix CNC Engineering’s success. “Because JAVELIN fully integrates everything we do, we’re using it to purchase all materials to the correct specification, and issuing the planned release of materials from our stores to the job card, along with the Goods Received Notes for all materials. This means we can provide complete traceability, which is a massive selling point for us.”

The company are currently based in 16,000 square foot premises on the Derbyshire/Nottinghamshire border, but are looking at the possibility of moving into a purpose-built 40,000 square foot complex in the next two years. As well as JAVELIN ensuring they are well equipped to manage their planned expansion, Phoenix have recently added two new 5-axis CNC machines to their tally of 22 machine tools, driven by the industry-leading EDGECAM CAM software.

The parts they manufacture are mainly airframe components for aircraft wings, made from aerospace spec aluminum and titanium. “JAVELIN’s Shop Floor Data Capture function lies at the heart of our production process. It shows the status of every job on the shop floor, and gives us the ability to drill down to all the key information. This is particularly valuable when customers ask about their job.”

Shop floor workers log on to JAVELIN with their own personal bar code; then a particular job and operation. “Each job usually has at least two milling operations, some will have three, some four, all of which are captured on JAVELIN. Logging all operations in this way, which only takes seconds, keeps us in complete control of every aspect of production.” SFDC also enables them to pull up the status of each CNC machine, either by operator or work center, showing whether they are setting or machining.

Annual turnover now stands at more than £6m and at least 20 batches of parts are produced daily. “We manufacture hundreds of different types of components, and there can be over 1,000 job cards going through the factory at any one time. With several hundred imminent jobs due for delivery in the next two months, JAVELIN is vital for keeping track of where everything is.

“Office staff and production workers have all embraced JAVELIN, as they understand fully what we wanted to achieve with it.”

Gary Jordan explains that their JAVELIN operation begins with the estimating and quotation function, saying the integration means they can quickly check any history round a particular inquiry to rapidly build a price based on the time needed to make a part and the cost of material. He says Sales Order Processing is a simple flow operation to enter data and raize the route card. JAVELIN produces three types of Purchase Order on a regular basis – for subcontractors, production and consumables.

“And we don’t manufacture anything without a JAVELIN Works Order. Route cards are designed in Crystal Reports, and barcoded, so from a production perspective the Works Order contains all the information everyone needs for the operation. We won’t launch a job on the shop floor without that.”

Before JAVELIN, Phoenix controlled and monitored all their office and production processes using spreadsheets and Microsoft Word. “We had to prioritize which JAVELIN functions we needed to get us up and running, as part of a drip-feed implementation. We had to ensure we had part numbers, routings and bills of materials set up first, but it meant delaying inputting some historical data, such as information to enable the MRP function to look at future demand.

“We’re continuing to verify that all the data we’ve put in over the last few months is 100 per cent accurate. In the meantime, while we order materials through JAVELIN, we still manually calculate the amount we need.”
He also intends to link every drawing and photograph with the bill of materials, engineering query notes and any other instructions such as a condition of supply. “We’re also linking photographs of the parts.

“The system can only be as good as the information we put in, and it takes time to build the data. But JAVELIN has more than delivered what we wanted to achieve at this stage. What excites me now is what it’s going to achieve in the future when we’ve completed all the databases.”

“We manufacture hundreds of different types of components, and there can be over 1,000 job cards going through the factory at any one time. With several hundred imminent jobs due for delivery in the next two months, JAVELIN is vital for keeping track of where everything is. ”